The purpose of the chapter is to present basic information about relational algebra as a theoretical language of operations.

Relational algebra is a theoretical language of operations the permits to create on the basis of one or two relations another relation without changing output data [1, 4, 6, 7, 9, 10, 12].

Both operands and product are relations, and thus outcomes of one operation can become output data for another operation. This gives the possibility to create nested expressions of relational algebra the same way as arithmetic expressions are built. This is called a property closure. That means that relations are covered by relational algebra the same as numbers by arithmetic operations [4].

Relational algebra is a language of sequential relations usage where all corteges, even taken from different relations, are processed by one command without loop organization. For commands of relational algebra there are several syntax options. Below we will apply generally used character expressions of these commands and present them in an informal form. More detailed information on this question an interested reader can find in the papers of Ullman, 1988.

There are several options of operations selection that are included into relational algebra. First Codd proposed to eight operators, but later were added some more. Five basic operations of relational algebra (fig.5.1.) are: selection, projection, cartesian product, union and set difference. They use most operations of data access that can be interesting for us. On the vase of five principal operations it is possible to deduce additional operations (fig. 5.1): join, intersection and division. 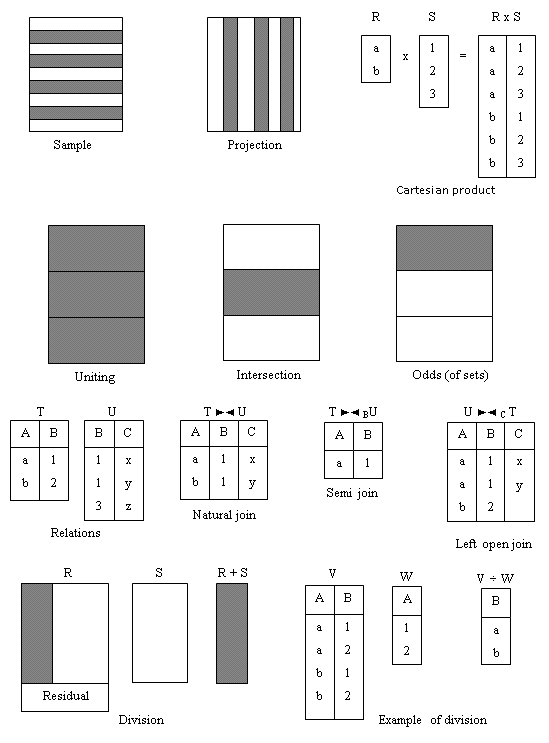 Access and projection operations are unary as they work with one relation. Other operations work with couples of relations and that is why they are called binary operations. In the given below definitions R and S – these are two relations that are determined on the attributes A = (a1, a2, …, an) and B = (b1, b2, …, bn) correspondingly. To illustrate the results of the operations execution we will use «LIBRARY» DB relations (appendix B).

Compose a list of librarians who have clock number that exceeds 80.

In this example, application operations of projection determines new relation that will contain only attributes ClockNumber, FamilyNamе, Name, Patronymic and HomePhone of relation Librarians, put in indicated order (table 5.2).

Compose a list of all readers who have ever taken books in the library using the following attributes of relation Readers: Code, FamilyName, Name and relation BookGiveOutRecord: Code, ReaderCode, InventoryCode.

In such form (120 corteges) this relation contains more information than necessary. For example first cortege of this relation contains different values of attributesReaders.Code and ReaderCode. To get necessary list (table 5.4) we should make a sample of corteges that meet equality Readers.Code = ReaderCode. Completely this operation looks asfollowing:

As we are going to see later, combination of Cartesian product and sample can be reduced to one operation - uniting.

Uniting of relations is possible only in case if their schemes concur, that is if they have equal quantity of attributes with domains (types of data) that concur. Such relations are compatible to unite. We should mention that in some cases to get two compatible relations the projection operation can be used.

Compose the list of familynames of all people that are mentioned in the DB.

To create compatible relations first of all it is necessary to apply projection operation so that it is possible to delete from relations Readers and Librarians columns with attributes FamilyName, including duplicates if necessary. After that to combine received intermediate relations operation of uniting should be used (Table 5.5).

Determine individual codes of readers who have never taken books it the library.

In this case, the same as for previous one, it is necessary to create integrated relation Readers and BookGiveOutRecord. Their projection must be executed according to the attributes Code and ReaderCode. Then we have to apply the operation of difference (Table 5.6).

Symbol of theta join can be represented on the platform of basic operations of sample and Cartesian product:

The same as for cartesian product, the degree of theta join is defined as sum of operand-relations R and S degrees. If predicate F is contained only in operators of equality (=), then this is an equi-join.

Compose the list of all readers that have ever taken books in the library (table 5.4).

The degree of natural joint is a sum of R and S operands-relations degrees minus quantity of x attributes. In the example of theta join equi-join was used to compose this list. There were present two attributes, Readers.Code and ReaderCode, that contain codes of library readers. If they would have the same name, for example ReaderCode, it might be possible to apply natural join operation to delete one of them.

Compose the list of all readers that have even taken books in the library (table 5.7).

Usually, when two relations are joined, the cortege of one relation can not find corresponding cortege in another relation. In other words, distinct values can be found in the columns of join. It can be necessary that the row of one relation is represented in the join result even if there is no concurrent value. This can be achieved by outer join.

To indicate absent values in the result join NULL determinant is applied. The advantage of outer join is saving of output information: corteges that are lost when other types of join are implemented.

To indicate code, family name, name, patronymic for all readers and information from BookGiveOutRecord for those who took books in the library (table 5.8).

The advantage of semi-join is that it permits to reduce the quantity of corteges that must be processed for join. It is particularly useful for joins computing in the distributed systems. Semi-join operation can be defined by means of projection and join operators:

Where A is a set of all attributes of relation R. In fact this is a half-theta-join and it is necessary to admit that there are semi-joins of equivalence and half-natural join.

Compose a report that includes complete information about all readers with name «Dmitry» who have ever taken books in the library (table 5.9).

Compose the list of librarians who are readers at the same time. Indicate their passport code, family name, name and patronymic.

To use the terms of compatibility for join of relations that intersect the corresponding operations of projection were implemented.

Data that are set into relations «READERS» and «LIBRARIANS» (appendix B) prove that the result of their join is a null set that means that non of librarians is a reader.

This operator can be noted down using other basic operators:

Create a list of names, surnames, patronymic names and passport codes of readers born after December 1, 1960.

Syntax of SQL-operators, that are applied for data processing in relational DBMS of different designers, can differ, but operations of relational algebra is a mathematical basement that units them. In case of necessity this fact can be useful to convert DB of relational DBMS that is applied for resolving current tasks of organization into the format of another designer.

All information placed on this Web site is designed for internal use only. Its reproduction or distribution in any form is prohibited without the written permission from Author.